The last few years have been very exciting for TTEAM work in South Africa. We now have several qualified Practitioners across Southern Africa! Practitioners are now located in Gauteng, the Western Cape, Free State, and Botswana If you are interested in a Private Consultation or in having a Demo/Lecture in your area, go to our Practitioner Page or email: info@ttouch.co.za

We also have an International Instructor in Lindy Dekker who organizes our TTEAM workshops. The first time we’ve had a Practitioner in South Africa who can do this. If you are interested in hosting a horse workshop you can contact Lindy at equibalance@iafrica.com or lindy@ttouch.co.za.

Every year we have TTEAM Instructors coming from overseas to give Practitioner Training for Companion Animals as well as horses.

The only people qualified to teach the 5-day TTEAM work are the TTEAM Instructors themselves. They are teach clinics worldwide. Thus Clinic Participants can rest assured that they will receive information first-hand, and learn up-to-date techniques, none of which have been “watered-down”, in the passing one person to person.

Both 5-Day and 2-Day clinics provide enough  information for you to go home and work on your own horse. You can also bring your horse with you to allow him/her to experience the clinic too. The 5-Day clinics are more intense with in-depth information on the TTouches, when, where and how to use them and often include riding as well. A 5-Day Clinic provides participants with sufficient opportunities to practice what they have learnt; as well as work with a variety of different horses. See the Workshop Page for Information on Dates!

Learning the TTEAM techniques will help each rider increase communication with their horse, identify and relieve areas of bodily soreness or discomfort, and help solve training blocks while enabling the horse to learn without fear.

A truly inspirational method for influencing behaviour, health and  performance, including the following:

The TTEAM method provides solid, practical and informative tools to help with: 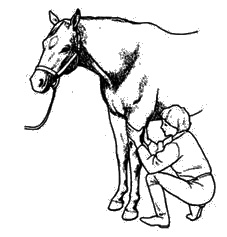 The History of TTEAM

Linda Tellington-Jones is an internationally recognised expert, who since childhood worked with horses and other animals. She competed extensively in equestrian events, including show jumping and eventing. It was in 1978, after completing a four year course in body-mind integration with Moshe Feldenkrais, that she wondered if the same principles could be applied to horses, increasing their ability to learn.

Over the next four years she worked on hundreds of horses developing ways of moving their bodies and working them through obstacles. She witnessed remarkable improvements in their behaviour and balance. This work was developed into the system that we know now as the Tellington-Touch Equine Awareness Method, or TTEAM for short.

“I believe TTOUCH is an extremely useful tool – available not only to experts but beginners too. I recommend anyone involved in horses to learn this gentle skill to the benefit of ALL” – Lindy Gordon-Brown

“I have started working on my horses now – using the TTouches. It’s working well on my yearling filly who injured her ear quite badly and got extremely head shy due to us having to treat it. She would literally rear and chop out if I went anywhere near the affected area. I am now able to touch both ears without her worrying too much about it.”   – Sharon van Rensburg

“These simple little and soft touches can really make such a big difference! It works like magic ! It gives an awesome feeling to the horse and your innerself ” – Lieselotte van Almenkerk

The last few years have been a learning period for South Africans in TEAMwork. We have had a Practitioner Training Program underway and now have several qualified TTEAM Practitioners here in Southern Africa! If you are keen to become a practitioner, please click here to Find Out How to become a Practitioner. If you are interested in a Private Consultation or in having a Demo/Lecture in your area, go to our Practitioner Page or email: info@ttouch.co.za

5 day Trainings usually take place twice per year. The workshops can stand on their own or be one module for those wanting to qualify as Practitioners.

One and two day trainings take place regularly throughout the year – depending on demand. If you would like to host a workshop please contact us at www.ttouch.co.za  or lindy@ttouch.co.za. See the Practitioner Page if you would like a private consultation and also to see the profiles of the practitioners. See Workshop Information for Clinic dates.